Shiobara Onsen is located in the north of Tokyo and accessible by 1 hour 10 minutes train ride on Tohoku Shinkansen bullet train, followed by 40 minutes road trip.
Along the Hoki-gawa valley, there are variety of inns (ryokan) ranging from a 400 year old historical inn to a newly-renovated inn. Going through the built-up area of Shiobara Township, you can reach Naka-Shiobara and Kami-Shiobara. If you turn left and follow steep and winding road towards the mountain, you can reach Arayu* in ten minutes. Following steep road down from Arayu, you can reach Motoyu**. 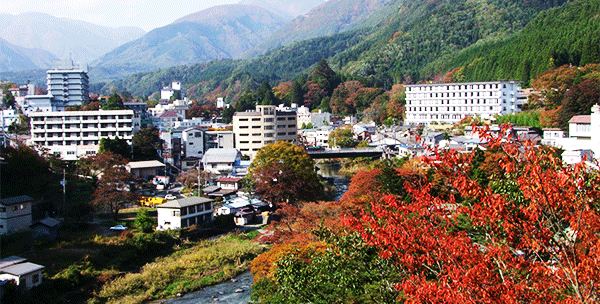 Shiobara Onsen (located in the north of Tokyo)

Taking the opportunity of visiting Shiobara Onsen, you should take a time to enjoy Hoki-gawa valley. Starting from Momiji-dani suspension bridge, you can visit either of three falls nearby; Ryuuka-no-taki, Kaiko-no-taki or Nuno-daki. The view of fresh green in spring or leaves turning colour in autumn is especially splendid.

After opening of Route 400 bypass along the Hoki-gawa valley, there becomes less traffic in the old Route 400, which was named as ‘Taisho Romantic Road’ and new pedestrian footpath was constructed by local people for visiting tourists to enjoy beauty of Hoki-gawa valley. There also is a new monument memorising great novelists and poets who visited and admired Shiobara. You will enjoy natural beauty of Shiobara by visiting the falls, monument and suspension bridges.

Botan flowers at Myounji Temple are ‘must’ to see in the season (=spring or May?).
Sakasasugi (Upside down cider?) at Shiobara Hachimangu Shrine is also a must. You can enjoy Mizubasho (in English?) flowers in spring at Kami-Miyori Botanical Garden. The Kotarogafuchi gorge is little known but interesting place. The gorge appears without expectation after following unpaved road by car. There is a tea house offering kusa-dango (Japanese traditional sweet made from rice and yomogi leaves) which is popular among visitors.

In summer time, you can enjoy field of lily flowers at Hunter Mountain ski resort located in the Myojin-dake Mountain just beyond Arayu. After going up by chair lift to middle of the mountain filled with lily flowers, you can walk down via comfortable footpath admiring the flowers. If you reach the summit of the mountain by gondola lift (or ropeway), you can enjoy view of Kanto Plain and mountains of Nikko Range during an hour’s walk through footpath. Hunter Mountain is one of the leading ski resorts in Kanto District along with Oze-Iwakura Ski Resort in Gunma Prefecture and attracts many snow-sports enthusiasts with its good powder snow in winter season.

If you are fed up with traditional foods offered by the inn, you may visit an Italian restaurant in the middle of township. There also is a restaurant offering a bit peculiar food like stirred noodle in soup as well as several traditional soba (black wheat noodle) restaurants. Fishing pond across the Hoki-gawa from Shiobara Mono-gatari Pavillion offers salted grill of ayu or fried rainbow trout, particularly feels tasty in natural environment. 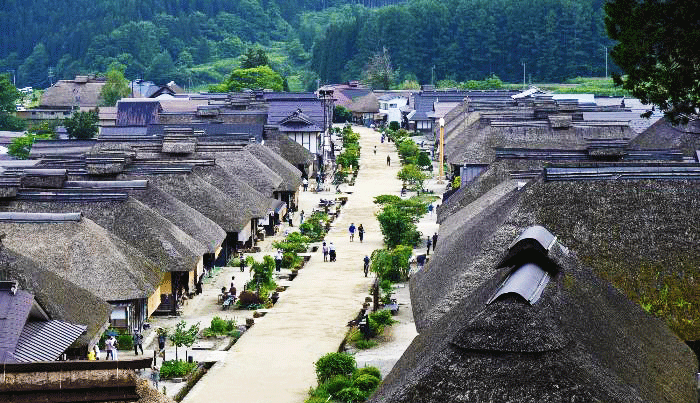 Ouchijuku (village with old inns and houses) in Oku-Aizu

You can enjoy Shiobara in different way by visiting tourist spots nearby from there. Nasu Plateau or Nikko is not so far from Shiobara. Ouchijuku (village with old inns and houses) in Oku-Aizu is becoming famous recently and sometimes you may face traffic jam or difficulty in finding parking place. As it takes about two hours by car from Shiobara, you had better leave early and visit Ouchijuku and ‘Tou-no-hetsuri’ (narrow gorge with rocks).

You may enjoy luxury of visiting Nikko (world heritage) and stay overnight at Shiobara on first day and visit Ouchijuku next day. There also are other interesting places than Ouchijuku such as Hinoemata, mountainous village at the entrance of Oze National Park, or Yunishigawa Onsen, known as refugee place of old Heike tribes in 12th century.
It will be easier to visit closer places like Otawara, where you can enjoy tasty beef, or Kurobane, where famous Haiku-poet Matsuo Basho stayed in 18th century(?).

Shiobara is in such a nice location, you can make a variety of travels around there. Of course, you can stay a several days in Shiobara and enjoy hot springs as well as golf, fishing, skiing or hiking depending on the season of your visit.

(All pics below enlargeable)

Shizuoka Prefecture offers many spots for viewing Mt. Fuji in variety of beautiful surroundings such as ones over the sea coast of Miho-no-Matsubara and also Nishi-Izu as well as over farmland and plateau like Asagiri-Kogen. But it also offers interesting spots of tourism not well known. I have recently made a trip to some of such spots and enjoyed them tremendously.

First Fujinomiya City itself where I found Fuji-Hongu Sengentaisha a quite charming shrine. The original shrine started at the time of the eleven's Emperor Suinin (29BC-77AD) to pacify the rage of Mt. Fuji eruptions located up north toward the mountain and in 806 the new shrine was built here.

People come here to pray, for not necessarily pacifying the rage of the mountain, rather for own happiness and wishes such as marriage, birth of babies, passing examinations of all kinds. To ensure such wishes to be realized many write their wishes on a little wooden plate called "Ema" and hang them at the specified spot in front of the shrine. To do this you must buy an Ema plate which among others contributes to the finance of the shrine. Along a long and tidy walk-pass to the shrine you could meet with local people volunteering to explain and answer any questions about the shrine. You could hear quite interesting and enlightening stories about the shrine and history. Charming little ponds inviting ducks could be good spots for taking photograph. Out of "Torii"(sacred arch) across the road you find a small square where a dozen of tiny shops surrounding a plaza with tables and chairs sell souvenirs, snacks and drinks (including sake and beer !) Some of them cook and sell "Yaki-soba" (fried noodles) well-known as "Fujinomiya Yakisoba", one of "B class Gourmet" some Japanese people named. It was quite tasteful and went extremely well with beer. In Japan one encounters with such light meals which are simple but tasteful and cheap meals others being "Ramen" (noodles with soup), "Gyudon" (Sukiyaki on rice-bowl) and "Okonomiyaki" (pan-cake with noodles) etc. It could be great fun to come here at times of festivals.

In early February a festival to ward off the evil and pray for good fortune by throwing beans over many people praying called "Mamemaki". In early May "Yabusame" (Horseback archery) takes place. And more in summer and autumn. Near Fujinomiya there are quite a few more places of interest. Water falls are examples such as Shiraito and Asahi Falls. An ancient cherry tree at Kariyado no Gebazakura and nearby clan houses deserve visiting in spring. I suggest you look up a website at FUJISANHONGU.

You could reach Fujinomiya City by taxi for 30 minutes from Shin Fuji St. on Shinkansen or 10 minutes walk from Fujinomiya Station on Minobu Line.
However for other purposes within Shizuoka Prefecture such as the undergoing it could be best to rent a car at Shin Fuji Station.

I stayed at Yaizu Grand Hotel which provided clean and efficient accommodation and good dinner and breakfast with ocean view. This hotel is a typical tourist hotel which could accommodate a few hundreds guests at a reasonable rate so that it attracts many groups of tourists. With such a hotel one usually encounters uncomfortably with many other guests in bath- room, lobby and dining room. But here I did not mind even the same situation probably because dinner and breakfast were so good at the price. Noteworthy are good tuna-sashimi (Yaizu is a known port for tuna and bonito fishing boats to discharge the captured) and other delicious seafood dishes. They served a quite good Muscadet-Sevre-et-Maine which went quite well with the meals.

The second place that I visited and found interesting was an old and long wooden pedestrian bridge over Oigawa River in Shimada City. The bridge constructed by woods with width of 2.7 m stretches to over 897m. It was first built in 1879 and its pier was reinforced by concrete piles in 1965. The bridge was registered in the Guinness of Records in 1997 as the longest wooden walking bridge. In old days travelers crossing the river had to pay a lot of money to men either carrying travelers over the shoulder or by a box carriage, a kind of "Rikisha" on water. In the Shimada city Museum records show that different toll rate was fixed and applied every morning depending on water depth. So when it was first built it must have been revolutionary as many men had lost the job and travelers paid cheaper toll and crossed the river much faster.

It is fun to actually walk over the bridge and look over the river. There are many good spots to take photograph including one with Mt. Fuji in the back if the weather is good. It is located 20 minutes walk from JR Shimada Station. As for lunch or dinner you could find high quality Japanese restaurant at very reasonable prices particularly near the City Hall.

Another point of interest nearby is a locomotive train journey along the Oigawa River. I tried it myself but it is not comfortable nor particularly exciting to look out the windows as landscape along did not look so attractive. I would rather recommend you to find good spots to take photographs of the train running particularly over a bridge.